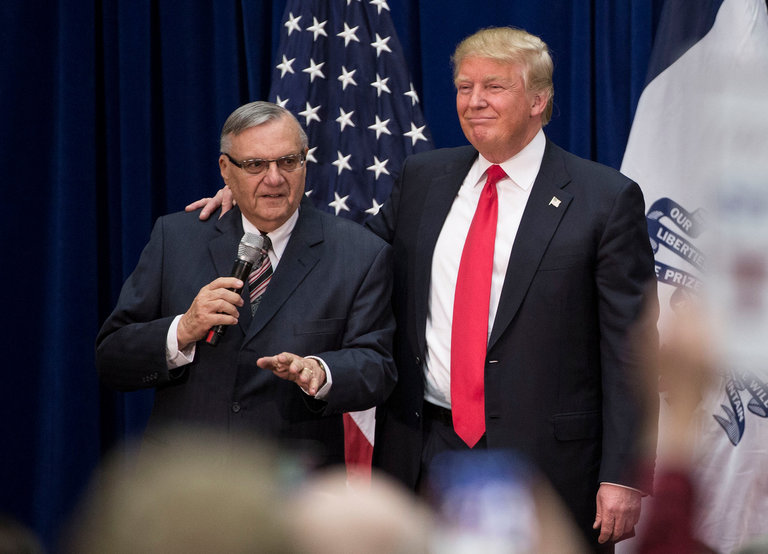 Article II, Section 2 of the United States Constitution provides that the President "shall have Power to grant Reprieves and Pardons for Offences against the United States, except in Cases of Impeachment." But the Constitution also provides for separation of powers between the three branches, and citizens also have certain rights under the Constitution, including the right under the Fourth Amendment to be free from unreasonable searches and seizures, and the right under the Fifth and Fourteenth Amendments to be free from discrimination based on race (among other immutable qualities), i.e. the rights to Due Process and Equal Protection under the law. President Trump's recent pardon of Maricopa County (Arizona) Sheriff Arpaio was not a garden-variety pardon. Rather, a federal district court judge had found that Arpaio was engaging in racial profiling, in violation of the Constitution, and issued an injunction prohibiting him from continuing to do so. After Arpaio ignored the injunction, the judge found him in criminal contempt of the order. Before he was sentenced on the contempt conviction, Trump pardoned him. But what does that mean for the people who were victims of racial profiling? Trump's pardon of Arpaio effectively means that those people now have no redress through the courts. Doesn't that violate the separation of powers doctrine? More importantly, doesn't that deprive the victims of the illegal racial profiling of their constitutional rights to Due Process and Equal Protection? A constitutional law professor from Northwestern University Pritzker School of Law has come to exactly that conclusion. Of course, this is an untested legal theory, so until Trump's pardon of Arpaio is challenged, it is presumptively lawful. Stay tuned...legal challenges of the pardon are almost certainly in the offing.